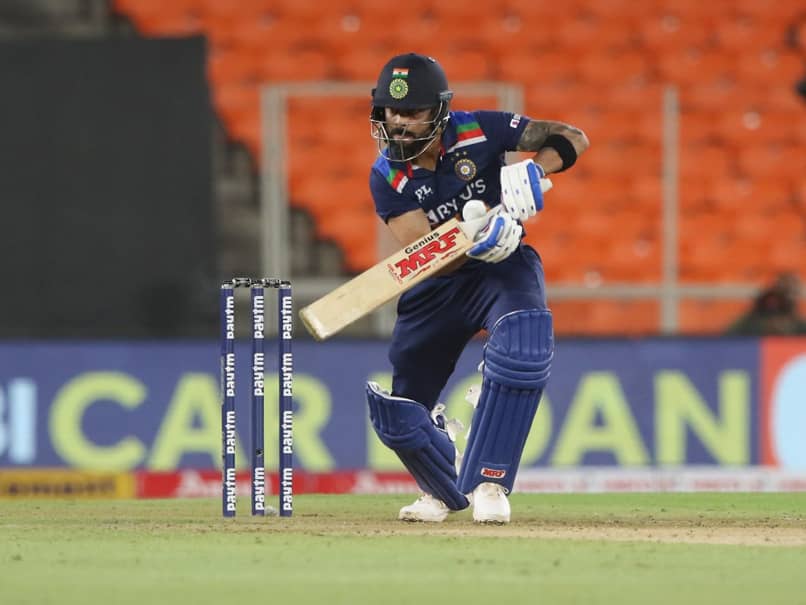 Virat Kohli on Tuesday equalled Kane Williamson’s record of most fifties as T20I captain. Kohli and Williamson both have 11 fifties as captain in T20I cricket and Kohli scored his 11th against England in the third T20I in Ahmedabad. The Indian captain’s knock of 77 runs off just 46 balls helped India make 156 for 6 at the Narendra Modi Stadium. Kohli had on Sunday become the first to 3000 T20I runs in men’s cricket. Kohli averages a staggering 52.17 in T20Is with a strike rate of 138.96.

Kohli’s innings helped revive India after they had found themselves 24 for 3 inside the Powerplay and then 86 for 5 in the 15th over.

Kohli took special liking to Mark Wood, smashing 4, 4, 6 in the 18th over of the innings and then smashing two more fours in the last two overs.

However, he found little support at the other end as barring Rishabh Pant (25) and Hardik Pandya (17) no other batsman could put up a score of substance.

It was Kohli’s second half-century on the trot in T20Is as he had hit 73 not out off 49 balls in the second game and contributed to India’s seven-wicket win.

Next on the list of captains with most T20I fifties are Australia’s Aaron Finch and England’s Eoin Morgan, both of whom have hit nine fifties.

Faf du Plessis with seven half-centuries is next on the list. He has also hit a T20I hundred.

Among the top three, only Finch has hit a T20I hundred.