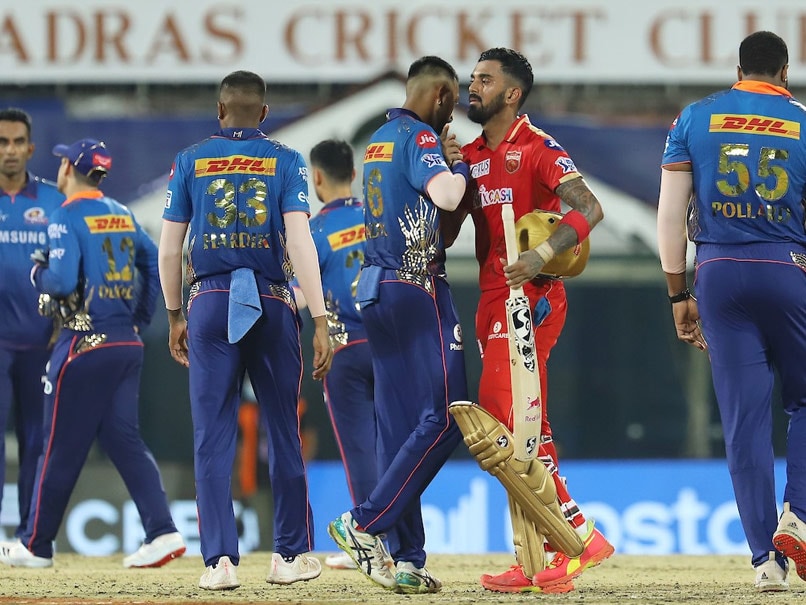 KL Rahul smashed an unbeaten half-century to take Punjab Kings (PBKS) defeat Mumbai Indians (MI) in Match 17 of the ongoing Indian Premier League (IPL) 2021 season, at the MA Chidambaram Stadium on Friday. PBKS won by nine wickets, and also climbed to fifth position in the league standings. Chasing a target of 132 runs, Rahul scored 60 off 52 runs to help Punjab reach 132 for one in 17.4 overs. Rahul’s knock consisted of three fours and three sixes. He formed a match-winning partnership with Chris Gayle, who scored an unbeaten knock of 43 runs in 35 balls packed with five fours and two sixes. Spinner Rahul Chahar took a wicket for Mumbai, in an otherwise poor outing for their bowlers. Earlier, MI wrapped up their innings at 131 for six in 20 overs, with captain Rohit Sharma registering a half-century (63 off 52 balls). Suryakumar Yadav also made a noteworthy contribution with 33 runs off 27 balls. Ravi Bishnoi and Mohammed Shami were in top form for PBKS, taking two wickets each. Meanwhile, Deepak Hooda and Arshdeep Singh registered a dismissal each. After the defeat, MI are just a position higher than PBKS level on points, but with a better net run rate.

With eight points from four games, Royal Challengers Bangalore (RCB) are on top of the IPL 2021 Points Table, and are yet to be beaten. With MI in fourth position, Chennai Super Kings (CSK) and Delhi Capitals (DC) are second and third positions respectively.

Before their win over MI, PBKS were in a three-match losing streak. In fifth position with four points from five games, Punjab are followed by SunRisers Hyderabad (SRH) in sixth position after four fixtures. Kolkata Knight Riders (KKR) and Rajasthan Royals (RR) are seventh and eighth respectively after four games.

Having scored the most runs last year, Rahul climbed to second position in the Orange Cap race, with 221 runs in five games. Rohit Sharma, who also scored a half-century in Match 17, is in third position with 201 runs from five matches. Shikhar Dhawan is still in pole position with 231 runs from four fixtures.

Rahul Chahar didn’t have a good outing for MI in Match 17, but he ended the night with a wicket. The India international is in second position in the Purple Cap race with nine wickets from five games. Harshal Patel leads the pack with 12 wickets.