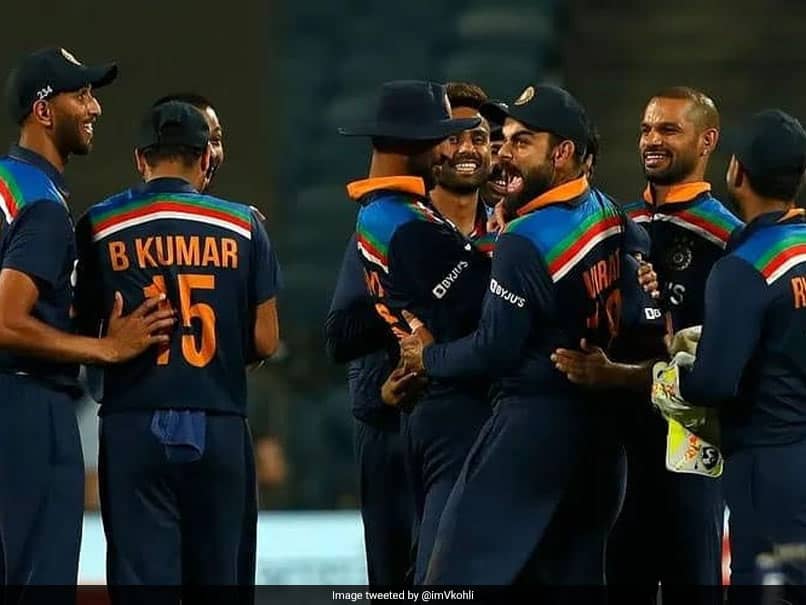 Virat Kohli took to Twitter to express his happiness after India edged out England in a thrilling decider in Pune to claim the One-Day International (ODI) series on Sunday. India defeated England in all three formats in the recently-concluded home series. The hosts came back from behind in the Tests (winning 3-1) and T20Is (winning 3-2) while in the ODIs, England were in the hunt till the last over of the series but the hosts held their nerves and came out on top in a nervous finale. After the match, Kohli posted pictures from the third and final ODI on Twitter and wrote “3 out of 3,” highlighting India’s dominance over England across formats throughout the home season.

After winning the series, Kohli lavished praise on Sam Curran, who nearly took the visitors over the line in the series decider.

However, Kohli was left surprised that Shardul Thakur and Bhuvneshwar Kumar didn’t win the player of the match and player of the series awards respectively.

“I’m surprised that he (Shardul) wasn’t the Man of the Match. Four wickets and scoring 30 runs and Bhuvi another contender for Man of the Series. These guys were the difference in middle overs and powerplay,” Kohli said.

The India skipper was also impressed by Krunal Pandya and Prasidh Krishna, who made their ODI debuts in the series against England.

“Prasidh and Krunal were impressive, but the most pleasing thing is the depth of our batting. Very exciting times ahead for us.”

“It has been an amazing season for us and we wanted to finish on a high. This tour has been sweet, winning every series,” Kohli added.

Kohli also highlighted that playing for two-three months while living in a bio-bubble is not easy for players and the scheduling needs to be looked at for future tournaments.

“Scheduling is something that needs to be looked at in these times…am sure things will be discussed and things will change in the future,” Kohli concluded.