Chennai Super Kings talisman Suresh Raina on Friday took to Instagram to share a picture from his hotel room where he is completing his quarantine ahead of the Indian Premier League (IPL) 2021. Raina, who missed the last edition of the IPL due to personal reasons, arrived in Mumbai on Wednesday and will join teammates after completing his quarantine. “Our king is back!!!” wrote CSK all-rounder Dwayne Bravo, reacting to Raina’s post. The MS Dhoni-led side endured a disappointing season last year as they failed to qualify for the playoffs for the first time in their history. Ahead of the upcoming season, CSK players have already begun their preparations as they look to improve on their standings from last year, which saw them finishing sixth in the eight-team tournament.

Raina, who had announced his retirement from international cricket on August 15 last year alongside CSK skipper MS Dhoni, has been beating the quarantine blues by watching Team India’s ongoing ODI series against England. 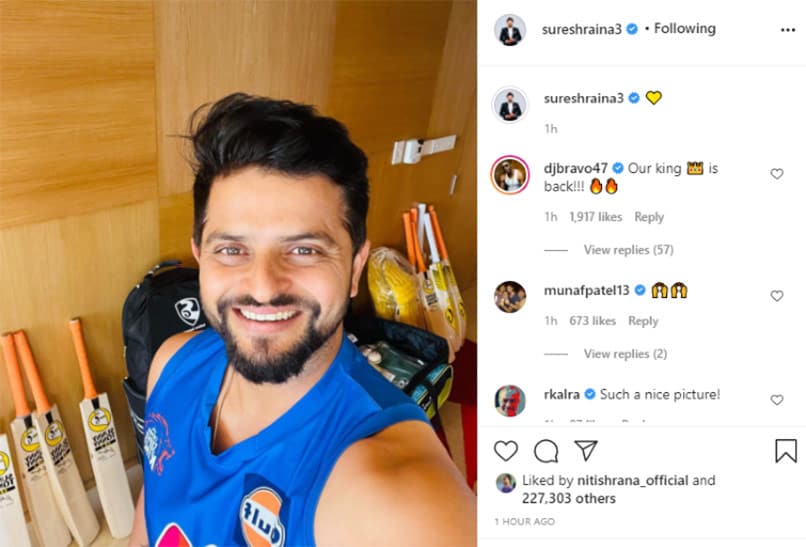 After India’s brilliant batting display in the second ODI, Raina took to Twitter to praise the superb knocks of KL Rahul and skipper Virat Kohli as they put on a 121-run stand for the third wicket. He was also impressed by Rishabh Pant’s explosive knock of 77 runs from 40 balls, studded with three fours and seven sixes.

Well, power-packed performance from @imVkohli and a classic knock by @klrahul11 took away my quarantine blues! Just too good pic.twitter.com/5TTeUUziHH

Ah my boy is on fire. What a knock @RishabhPant17 brother. Some splendid strokeplay on display today. Way to go. pic.twitter.com/Psw15ddUyZ

Dhoni on Wednesday had unveiled the new jersey that the CSK players will be wearing in the upcoming edition.

The IPL 2021 will begin on April 9 with five-time champions Mumbai Indians facing Royal Challengers Bangalore in Chennai. CSK, who have won the tournament thrice, will play their first match on April 10 against Delhi Capitals in Mumbai.

The 14th edition of the cash-rich league will be played across six venues — Chennai, Mumbai, Delhi, Kolkata, Bangalore and Ahmedabad.