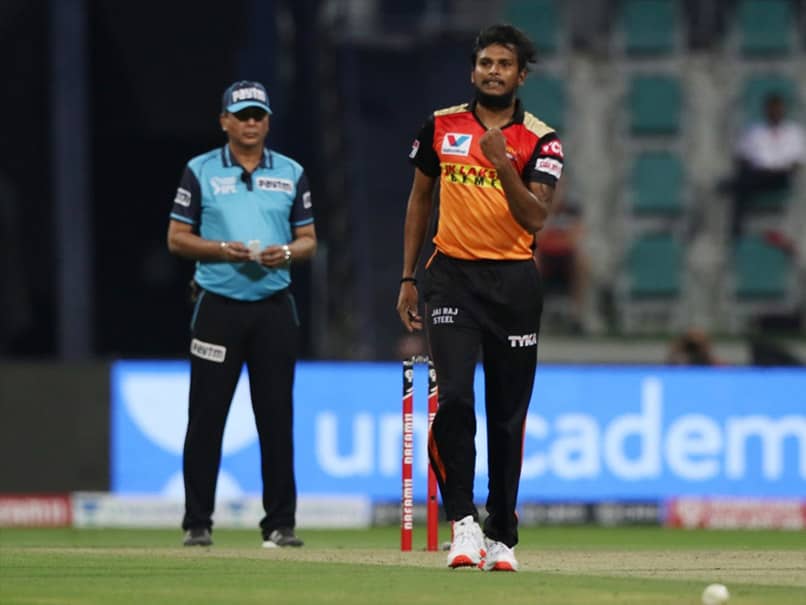 T Natarajan has been ruled out of IPL 2021 due to knee injury.© BCCI/IPL

SunRisers Hyderabad (SRH) pacer T. Natarajan has been ruled out of the Indian Premier League (IPL) 2021 after he aggravated his knee injury. The 30-year-old left-arm seamer on Friday confirmed that he will undergo knee surgery. Natarajan had originally injured his knee during India’s tour of Australia earlier this year. He confirmed his departure from the cash-rich league in a short video shared on the official Twitter handle of SRH, before saying that he wanted Hyderabad to “go out and win every game this season”.

“I’m sad to miss the remaining games. Since, I played well last season and went on to play for India, my expectations were high. Unfortunately, I have to undergo knee surgery and will miss the season,” Natarajan said.

The franchise in turn wished him a “speedy recovery”. “@Natarajan_91 has been ruled out of the tournament due to injury and we along with the entire squad wish him a speedy recovery,” SRH captioned the post.

@Natarajan_91 has been ruled out of the tournament due to injury and we along with the entire squad wish him a speedy recovery #OrangeOrNothing #OrangeArmy #IPL2021 pic.twitter.com/b4mzS3Rfrp

Natarajan also expressed his gratitude to the SRH players and staff for their support. “Thank you to SRH family – support staff and players. They supported and motivated me a lot. I’m going to miss the SRH family this season. I have no words to say right now,” he said.

Natarajan was also left out of SRH’s last two games. He played just two matches in IPL 2021 and bagged two wickets. The 30-year-old was also forced to miss the first four T20Is against England. He joined the Indian squad for the final T20I after he was given clearance from National Cricket Academy (NCA).

SRH have won just one match in their opening four games this season. The David Warner-led outfit will next take on Delhi Capitals on Sunday at the MA Chidambaram Stadium in Chennai.