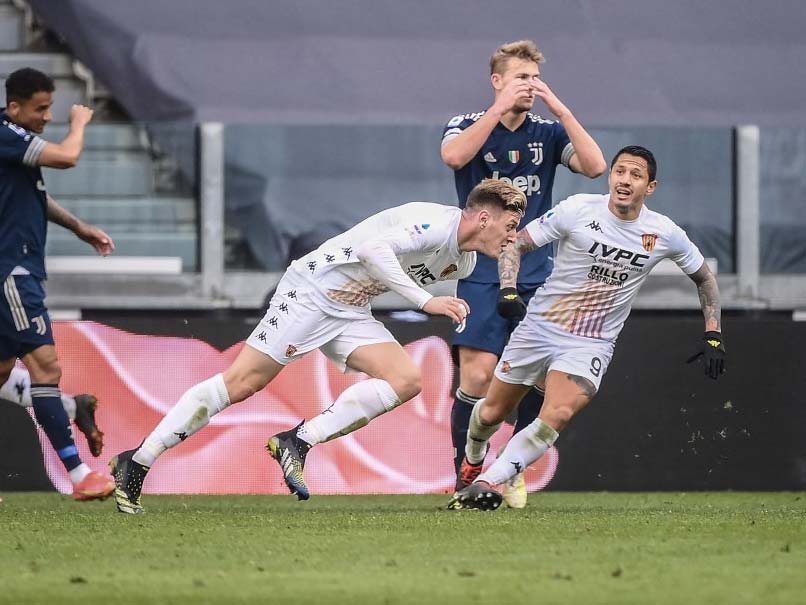 Juventus’ hopes of winning a 10th consecutive Serie A title took another blow on Sunday with a 1-0 home loss to lowly Benevento. Argentine forward Adolfo Gaich scored the game’s only goal in the 69th minute following a bad pass across the penalty area from Juve midfielder Arthur. Andrea Pirlo‘s side stay third, 10 points behind Inter Milan whose match against Sassuolo was postponed because of a Covid-19 outbreak at the league leaders. It was a fourth league defeat for Juve, who have 11 games left to play this season, and another blow after being dumped out of the Champions League at the last 16 stage by Porto earlier this month.

“It’s not a question of pressure, we had to play a better game, we had to win,” said Pirlo.

“We had a bad game in every way. We rushed too much, we made too many mistakes.

“We have to continue to believe in the title. We must continue to follow our path to be able to try to stay there.

“The objective does not change, it is the head which must change.”

Cristiano Ronaldo had scored a hat-trick last time out against Cagliari in the league, to bring his tally to a record 770 career goals in official matches.

And the 36-year-old was presented with a ‘GOAT’ jersey by club president Andrea Agnelli before kick-off for breaking Brazil legend Pele’s official goalscoring record.

But the Serie A top scorer, who has scored 23 times in the league this season drew a blank at the Allianz Stadium with Benevento goalkeeper Lorenzo Montipo pulling off a string of fine saves.

Ronaldo fired wide minutes into the game and had the ball in the net just before the break only to be ruled offside, while Montipo denied Alvaro Morata an opener after half an hour.

Benevento broke the deadlock following Arthur’s horrendous pass across the face of goal towards Danilo, which allowed Gaich to pounce for his second goal in five games since arriving on loan from CSKA Moscow.

Federico Chiesa had penalty appeals for a Daam Foulon challenge overruled amid protests from the entire Juventus team.

Montipo then denied Ronaldo twice late on, first from close range with 10 minutes to go and again in the final minute, with Danilo then sending the rebound over the bar.

After holding Juventus 1-1 in their last meeting, 16th-placed Benevento earned a precious three points in their fight against relegation and now sit seven points away from the drop zone.

Juventus are equal on points with Atalanta, who bounced back after their Champions League exit to Real Madrid with a 2-0 win at Hellas Verona to consolidate fourth place.

Ruslan Malinovskyi scored the first from the penalty spot after a Federico Dimarco handball in the 33rd minute in Verona.

Duvan Zapata added a second before the break, after an earlier effort hit the post, the Colombian sweeping the ball past Marco Silvestri into an empty net.

Verona coach Ivan Juric was serving a touchline ban and Gian Piero Gasperini surprised with a four-man defence instead of his preferred three.

Zapata spearheaded the Atalanta attack with Luis Muriel and Josip Ilicic both starting on the bench before coming on for the final quarter of an hour.

“There are many teams fighting for the Champions League. We’re the underdogs but we’ll battle to the end,” said Gasperini.

“We hope there won’t be any problems as happens during the international break and players return fit.”

Atalanta are five points ahead of both Napoli and Roma who face each other later on Sunday, while Verona fell to a third successive defeat to stay ninth.

Lazio also recovered from the Champions League elimination to Bayern Munich with a 1-0 win at Udinese thanks to an Adam Marusic goal seven minutes before the break.

The Romans are six points off fourth place.