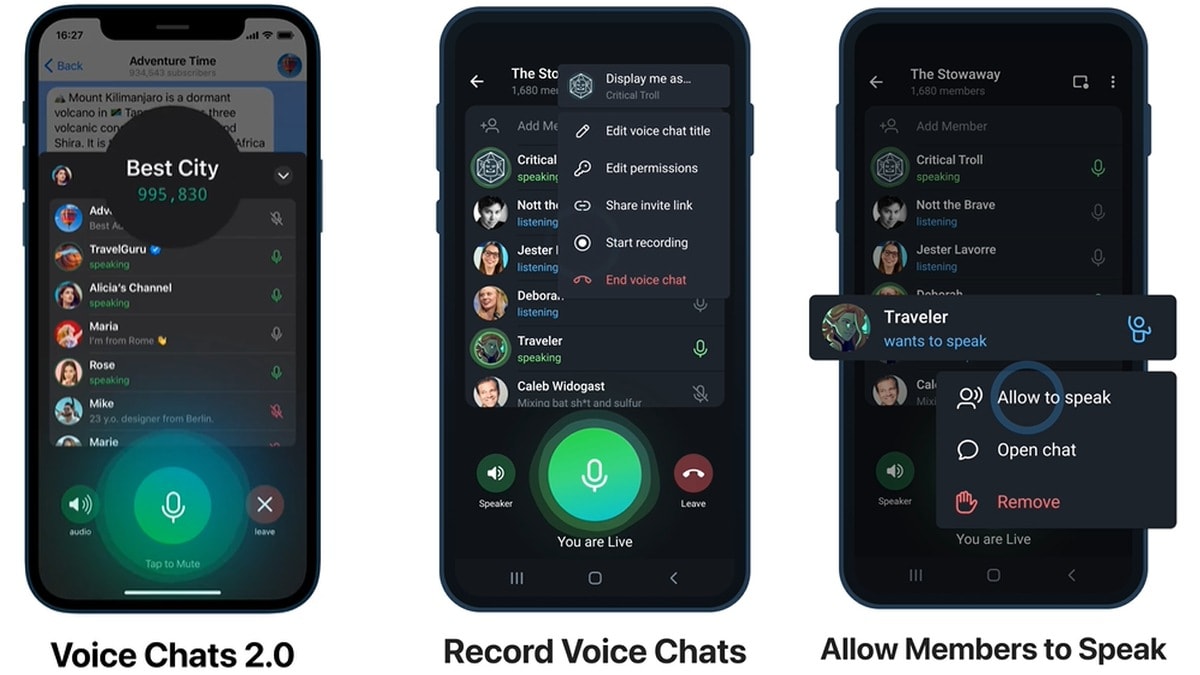 Telegram, a popular messaging service, has launched a Clubhouse-like feature called Voice Chats 2.0 that lets users conduct live voice chat sessions with unlimited participants. The feature is bundled with other features like the ability to record voice chats, hand raising mechanism, invitational links, and voice chat titles. The update comes in wake of the popularity of voice-only messaging services like Clubhouse and Twitter Spaces. The app also lets users cancel forwarded messages, replace recipients, and listen to voice messages from where the users left off.

In a blog post on Friday, Telegram announced a host of features that essentially mirror what Clubhouse provides. It will let admins of channels and public groups conduct voice calls with unlimited live participants. The company had earlier launched this feature only for group chats. Admins can also record the voice call to share with participants of the group/ channel who may have missed the live voice call session. Also, participants can see when the call is being recorded with a red light next to the name of the voice call.

Just like Clubhouse, participants remain muted and can ‘raise hands’ to show the admins that they are interested in speaking in the voice chats. The admins have the discretion to select which listener can participate by viewing the bio of the listener. Telegram allows group and channel admins to create links that will help participants to directly join the voice call. Alongside, admins can create separate links for speakers and listeners to monitor who is speaking in the call. The app also allows celebrities to maintain their privacy by allowing them to join a call using the name of their channel on Telegram.

Telegram has also added a feature for Android users to choose which action can be configured by swiping left in the chat list. The actions range from archiving, pinning, muting, deleting, or marking a chat as read. iOS users also have this feature but can either swipe left or right to access them.

Does WhatsApp’s new privacy policy spell the end for your privacy? We discussed this on Orbital, our weekly technology podcast, which you can subscribe to via Apple Podcasts, Google Podcasts, or RSS, download the episode, or just hit the play button below.