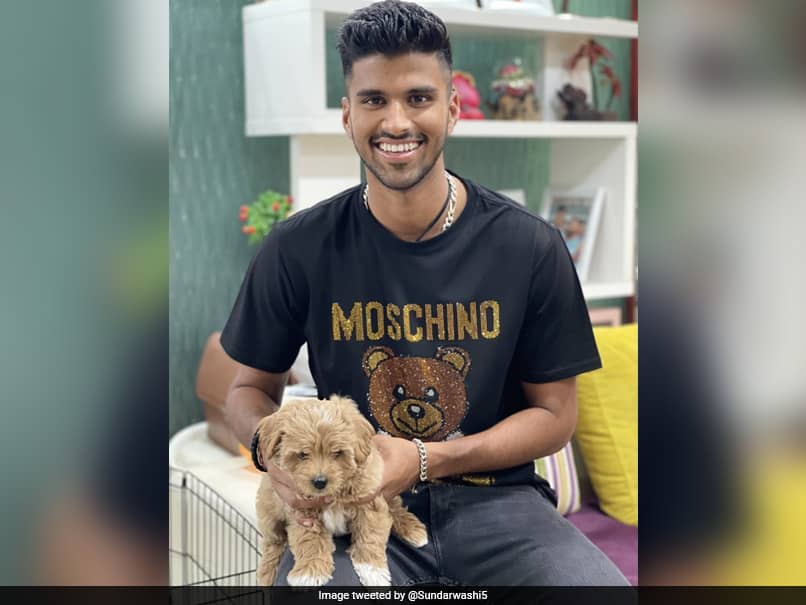 Washington Sundar named his dog after the venue in Australia where he made his Test debut.© Twitter

Washington Sundar made his Test debut for India largely because an injury kept Ravichandran Ashwin out of the playing XI in the fourth and final Test against Australia at the Gabba in Brisbane. He became an instant hero to Indian fans thanks to some brilliant performances with both the bat and ball. He took four wickets in total but more importantly, he scored a back-to-the-wall 62 to bail India out in the first innings and followed it up with a 22 in the second. All in all, it was a spectacular debut for Sundar, one for the ages. And now the Indian cricketer has commemorated it by naming his dog after the venue he made his debut at — Gabba.

Washington Sundar posted a picture and introduced his four-legged-friend to the world.

During the Gabba Test, Washington struck at a crucial juncture, making Australia’s premier batsman Steve Smith his first Test victim. He followed it up with the wickets of Cameron Green and Nathan Lyon to finish with figures of 3/89 in the first innings.

With Australia managing to post 369 in the first innings, India were under pressure to start well. However, the Indian top-order crumbled and when Rishabh Pant was dismissed, the visitors found themselves at 186/6, staring at a big first-inning deficit.

Sundar and Shardul Thakur, though had other ideas. The duo hit maiden half-centuries, adding 123 runs for the seventh wicket — the highest seventh-wicket partnership for India at the Gabba.

Thanks to them India reached 336 in the first innings, Australia’s hopes of a big lead dashed.

The second innings was all about the heroics of Rishabh Pant with the bat with the Indian wicket-keeper scoring a scintillating 89 not out to take India to one of their most memorable wins in Test cricket.