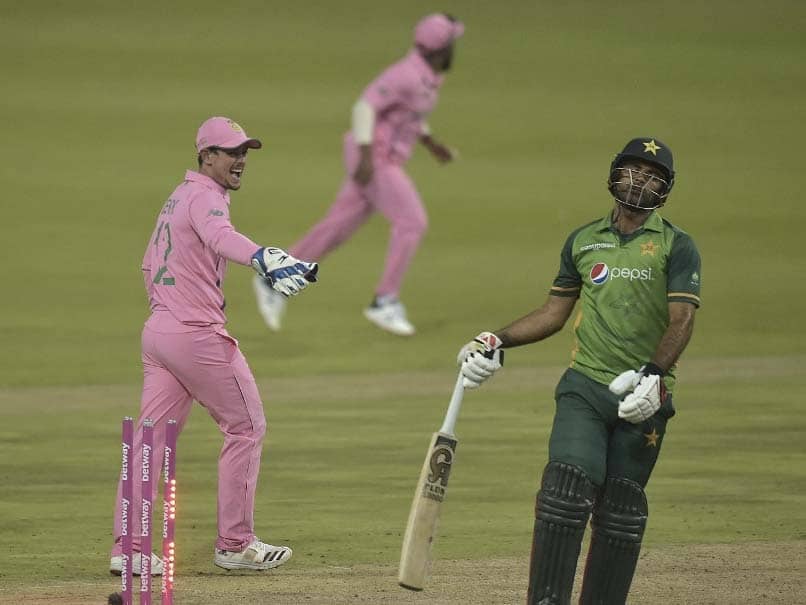 Fakhar Zaman was run-out on 193 in controversial circumstances in the 2nd ODI against South Africa.© AFP

Former Pakistan pacer Shoaib Akhtar has expressed disappointment after opening batsman Fakhar Zaman missed out on a double-century following a controversial run-out in the second ODI against South Africa on Sunday. Zaman’s valiant 193-run knock came to an end on the first ball of the final over as a direct hit from Aiden Markram from long-off caught him short of his crease. The run-out triggered a debate as wicket-keeper Quinton de Kock appeared to gesture that the throw from Markram might be going to the non-striker’s end.

Looking at this gesture, Zaman slowed down as he thought the throw would not be coming at his end, but Markram’s throw took him by surprise.

Akhtar though agreed that the gesture by de Kock wasn’t the same as “cheating” but admitted it also wasn’t in the “spirit of the game”.

“What Quinton de Kock did, I wouldn’t call it cheating, but it was not in the good spirit of the game,” Akhtar said in his YouTube channel.

“The spirit of the game was hurt which I didn’t like. Quinton de Kock is a great kid and he shouldn’t do it deliberately. Fakhar thought that when the throw was made, it would come to the non-striker’s end and he [Quinton] also made the same gesture,” he added.

The Rawalpindi Express said he wanted to see a player from Pakistan becoming the second cricketer to smash two double tons in ODIs.

“I felt bad because I wanted Fakhar to become the only Pakistani batsman to have two double centuries. If those penalty runs were given to Pakistan, they would have won the game easily. But I was disappointed that the decision wasn’t made then and there. There was no awareness of the game,” said Akhtar.

After the incident, Marylebone Cricket Club (MCC) took to Twitter to explain the law, saying it is up to the umpire to decide whether the act of the fielder to distract the batter was willful or not.

Zaman had also said that de Kock made no mistake and it was only his fault that he was found short of the crease.